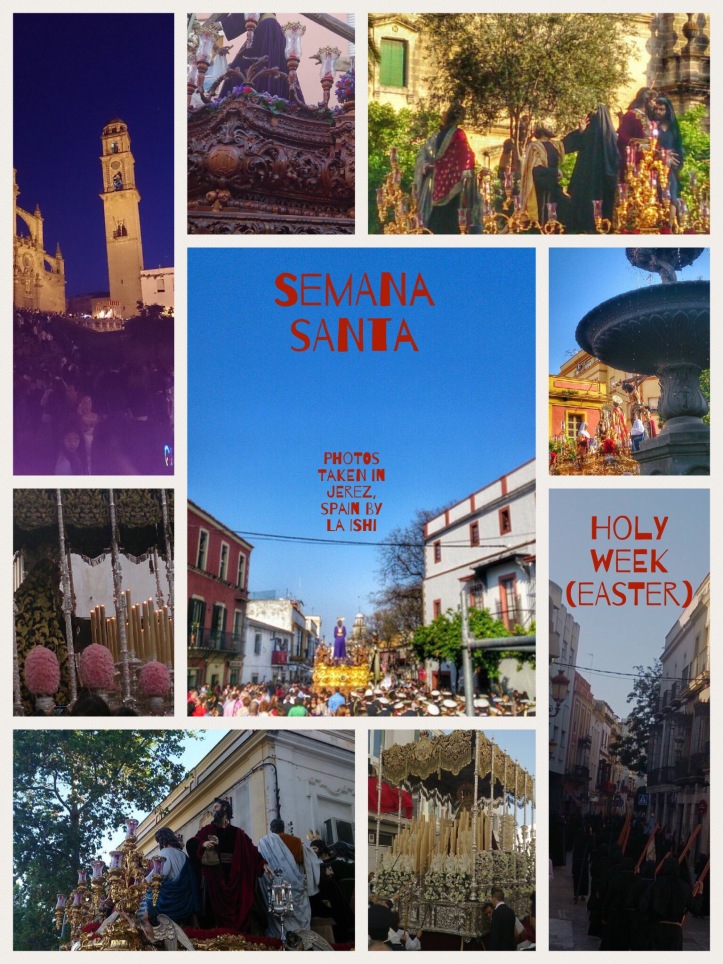 A few pages from La Ishi’s journal...
Amor de Semana Santa..February is damp in Jerez de La Frontera, Spain. Blanket cover edges are moist where they have absorbed the dampness that seeps through our lavender walls.

Our afternoon siesta (nap) is broken by the sounds of a death march. Tarrrrrrum tum tum Tarrrrrrum tum tum. Luis peaks his head out of our balcony window and shouts down to the neighbors–‘They’ve begun practicing already? Let’s see who could it be’ Slowly on the street a small group gathers to chat about the coming rehearsals for Semana Santa, with Luis who sips his afternoon coffee on the balcony.Eventually, we all venture out onto the street to see if we can catch a peek of the march rehearsals.

Just blocks away a marching band is practicing for Semana Santa, Holy Week. Costaleros (Float Bearers during Holy Week processions) also practice the march. It takes up to 40 men to carry each float. Each man must bear 60 pounds on his shoulders. Luis de La Tota, who carried La Virgen de Carmen for 20 years, says that after 12 hours straight of carry a float, 60 pounds doubles to 120 pounds. The men practice hours upon hours. Under the float that can way up to 2400 pounds, covered from view by curtains, the Costaleros move in pin point timing and they carry their Icon blind. They are guided by the commands of one man in the front of the float El Capatá, and two from the back Los Contraguias. The Costaleros must walk in unison guided by the music of the marching band, only knowing when to turn right, left, stop, lower by the commands of the three guides.

Luis believes that so many years of carrying the floats as a Costalero, instilled in him a sense of rhythm. Blind trusting rhythm. The ability to connect to a group of individuals to become one moving vessel. A rhythm that can carry weight. A rhythm that can endure for hours and hours even after this weight doubles to unbearable proportions. Flamenco.

There are Flamenco styles such as Solea or Sigguiriyas that carry a weight that deepens as the song or dancer unfolds a story. Truly the dancer could feel like a Costalero. Carrying the weight of the singers story. If it is true Flamenco-the dancer and guitarist will do it ‘blindly’. By blindly-I mean they will forget choreography or anticipation so that the Singer can lead them.

Us foreigners fancy picking up this folkloric traditional artform in a school, in a workshop or in a book. It turns out, that people like Luis are legions ahead of us. Not because they studied. Not only because they were born into it, but because they participated in their cultural activities, and then understood what made these activities so very Flamenco. Just as important, they understand where the line of Andaluz culture, Flamenco culture, Gypsy culture begins, ends, blurs, combines then separates by having participated in cultural activities such as marching in Semana Santa. For example, Luis, por bulería will reference his time as a costalero by singing a saeta and doing a slow march with his arms in the position that a costalero would have. It’s pretty comical. Its funny even if you do not know what he is imitating. It’s hilarious and awe striking for those of us who live in Andaluz culture and understand the depth of what he is doing.

Luis, 12 hours a day for a week for 20 years. Thats 1,680 hours on this rhythmic spiritual quest. Fine tuning faith and his ability to walk blindly under 2,400 pounds of weight with his 39 comrades.

Aside from the actual lesson of endurance and blind faith learned, Luis and his comrades had to prepare. They had to learn about learning first. (I think we call this ‘practice’ in other parts of the world) Wait ….wahh..So Luis de La Tota who was debuted as an ARTIST at 8 years old, had to turn around and train to learn when he was 20 years old? After all of that experience he had? Yep. And he threw himself willingly and gloriously into the fold.

Thank you for reading!