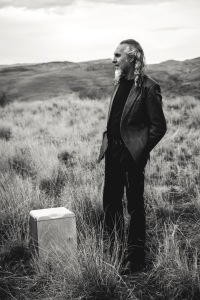 Luis is a beloved teacher known for his

compás with endless energy, humor and

grace. Born in one of the oldest Gypsy

his career as a percussionist at the age of

8. He takes his artistic name from his

grandmother ‘La Tota’, who has been an

inspiration to him since his infancy. As a

percussionist and palmero, Luis tours with

Vargas and has come to the USA several times with dancer

Maria “Chacha”Bermudez. As a Flamenco lyricist, his verses

(letras) have been recorded widely and his work as a

percussionist can be heard on many CDs. Finally, it may

such as Iron Maiden, Luis along with his twin brother Ali (who is

also a palmero) consider themselves to be ‘Flamenco Heavies.’

What is Flamenco all about? And how does it find it’s way out of the Gypsy caves of Spain, filter past the tabancos (bars) and tablaos to cross a gigantic ocean and then find it’s way to a skate-boarding, lindy-hopping girl from Boise, ID? Where’s the connection? These are the questions that drove Estefanía to take a journey of dance and song in search of answers. Along the way ,she discovered others that in one form or another, were curious about their fiery passion for Flamenco also. From her beginnings at Solo Flamenco (Portland,OR) in 2003 studying with Laurena Marrione, to her travels in search of connections with enthusiasts in cities such as Seattle, Santa Cruz, and San Francisco, Estefanía gathered a network of forever-friends that would guide her back to the birth place of Flamenco. She began studying in Sevilla,Spain in 2009 with Angelita Vargas and Juan del Gastor. Then in the late summer of 2009, Estefanía decided to plunge deep into the Gypsy culture of Andalusia, taking on La Chiqui de Jerez (cantaora) as her Maestra not only of singing but of Spanish language and culture. This is what Estefanía calls her ‘point of no return’, studying with La Chiqui exclusively and intensely for 3 straight years before slipping on her dance shoes again to apply to the dance, what she had learned from the cante (song of Flamenco). She continues to study dance, cante (singing), and rhythm, however she learns with respect to the culture of Flamenco. This means returning to Spain frequently to study exclusively with world renown maestros such as Maria del Mar Moreno, continuing to share with her network of American Flamencos, and always always asking herself the same questions-‘where’s the connection? How does this tie into my life, and how do I cultivate the culture, the lifestyle where ever I go? The journey continues, it becomes more beautiful everyday, aging to perfection like a bottle of wine.

FLAMENCO CULTURE PROJECT:  ‘The goal of this project is to shine a light on the culture of Flamenco through video and photos that record the daiily lives of  the Andalusians. Regular people that live the life of Flamenco sin ser artista with out being recognized as ‘artists’, my collection shows how being a Flamenco AND having a profession is possible. Street sweepers, butchers, fishermen, nannies and house wives prove that Flamenco exists as mode of emoting, a form of therapy that can be tapped into at the whim of the beholder.

of Flamenco Music and Songs dating back to the 1970’s

alive by sharing Andalusian history, culture, her collection of Flamenco video and music with Flamenco enthusiasts

of the NW. We hope to unite the NW Flamencos and increasing education by participating and funding projects that

support Artists of Spain by bringing them to the US to give workshops and perform.

Escuela De Ritmo (Boise,ID) a school dedicated to the Art of Flamenco Compas.